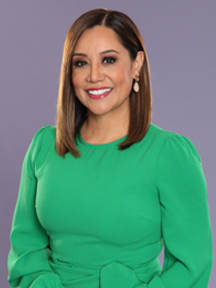 Jessica Gonzalez is born and raised in El Paso.

She graduated from Irvin High School and received her degree in Journalism and Mass Communications from New Mexico State University in 2007.

During her time at NMSU, she became involved in the production of the student-run newscast, News 22 where she filled in on the anchor desk.

She later became part of the morning show at the Univision affiliate in El Paso in the production team before being offered a job at ESPN.

Jessica then made the big move to Connecticut in 2008 to work for the world-wide leader in sports.

While at ESPN, she was part of the Global Operations Department and worked in production on several shows and events such as SportsCenter, Monday Night Football and Sunday Night Baseball.

Being a journalist at heart, Jessica decided to come back to the Borderland continue her career in news.

She joined the KFOX14 team in 2014 as an assignments editor and later spent several years as a digital content producer for both KFOX14 and CBS4. During her time with the digital team, Jessica covered events like the Pope's historic visit to the Borderland.

In 2018, Jessica made the move from behind the scenes to in front of the camera and spend nearly two years as the morning traffic anchor before taking on the roll as the KFOX14 Morning Anchor alongside John Purvis.

Jessica has a heart for writing and delivering news and is excited to do so in her hometown.

When she's not at the news station, Jessica enjoys spending time with family and traveling. She has a son and two daughters and a cute boxer named Mia.

Join Jessica and the team every morning on the KFOX14 Morning News from 5 a.m. to 9 a.m.

For story ideas email her at jessica.gonzalez@kfoxtv.com.